Can New Buildings Be Rent Stabilized? Yes, They Definitely Can

Most New Yorkers associate rent stabilization with old buildings, low rents, walk-ups, and, let’s face it, neglectful landlords who fail to make even the most basic repairs.

With some important exceptions, rent stabilization generally applies to buildings of six or more units built after 1947 and before 1974. Until the state rent laws changed in 2019, vacant apartments that reached a certain “legal rent” (between roughly $2,000-$2,700 in recent memory) lost their status as rent-regulated and turned into “market apartments.” Landlords who fully renovated entire buildings also took advantage of loopholes in the Rent Stabilization Code to convert the entire building into “market rate” apartments. For this reason, many New Yorkers associate rent stabilizations with larger, older buildings with low(er) rents. But that’s often not the case.

Rent Stabilization Through J-51 and 421-a Tax Abatement Programs

J-51 and 421-a, the two most common tax abatements, offer owners incentives to renovate or create new residential apartments. In exchange for these tax benefits, owners have a few key obligations to their tenants:

Researching Whether Your Building Has A Tax Abatement

There are a few ways to check if your building receives J-51 or 421-a:

Check your building status with JustFix’s Who Owns What (“WOW”) tool. WOW now flags if a building receives J-51 and 421-a tax abatements. Look up any address and navigate to the Portfolio Tab to look for evidence of the tax abatement under the “Tax Exemptions” column.

Use CoreData.nyc to visualize properties with tax abatements. Created by NYU Furman Center, CoreData incorporates public information into an interactive data and mapping tool. Information like subsidized housing, demographics, zoning regulations, neighborhood conditions and more are all options you can overlay onto the map. 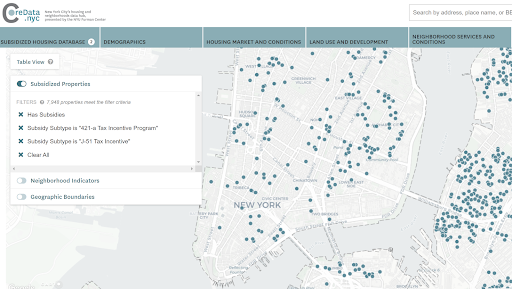 Review government websites. The City of New York maintains a list of buildings receiving tax abatements. Check out the New York City Department of Housing Preservation and Development (“HPD”)’s list of J-51 buildings by borough and year. Visit the Department of Finance (“DOF”)’s database for a list of 421-a buildings. 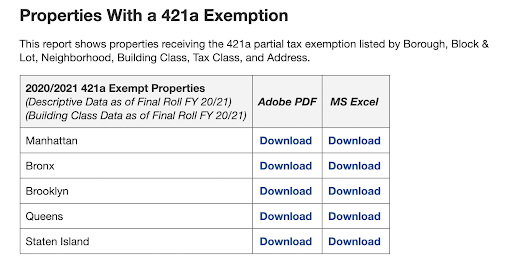 Back to top ↑
Want to take action?

Find out who owns your building

Search my Address
Back to top ↑

Getting Your Landlord To Recognize Your Rent Stabilized Rights

Provide a copy of all your leases (first and any renewals) as well as any government websites showing that your building has (or had when you moved in) J-51 or 421-a benefits. You can mail these documents to:

Getting recognized as rent stabilized is just the first step in your journey to stable, long-term rental housing. Next, you need to file a rent overcharge complaint to get your rent lowered and recoup past overpayments (plus potentially damages and interest). In addition to your leases, you’ll need to provide rent bills and proof of past rent payments.

JustFix creates tools to protect your housing rights, from getting repairs to responding to eviction notices. Enter your address to see our tools.

Show me the tools

Research and understand your rights with our articles and guides.