Rent History 101: Is your landlord illegally overcharging you?

In New York City, rent stabilization safeguards more than one million apartments, protecting tenants from drastic rent hikes and evictions without good cause. This article will help you explore whether your apartment is rent stabilized and, if so, how to detect illegal rent increases.

Take the first step in your journey to understanding your apartment status and rent by ordering your rent history.

What is a rent history and how do I get mine?

New York State maintains a private database of rent stabilized apartments, listing former tenants and their “legal” rents between 1984 and today. While the general public has no right to order a copy of your apartment’s rent history, you, as the occupant of your apartment, have the right to request a copy via mail or in person. JustFix’s Rent History Tool helps you request your rent history from the New York State Division of Homes and Community Renewal ("DHCR”) via snail mail (DHCR won’t email copies). Any occupant of an apartment with access to the mailbox can make the request. Tenants can also obtain a same-day copy of their rent history by visiting a DHCR borough office. Make sure to call first to make an appointment and bring proper identification and proof of address.

Back to top ↑
Want to take action?

Get your apartment's Rent History

Your Rent History can help you find out if your apartment is rent stabilized and if you are being overcharged on rent.

Submit Request
Back to top ↑

What if there’s no rent history for my unit?

Caption: Who Owns What reports changes in rent stabilized unit registration between 2007 and present day. As you can see, the building on Sheridan Avenue has remained fully rent stabilized while the owner at 79 Clifton Place reports having deregulated more than 50% of the building’s units since 2007.

If the State cannot locate your rent history, this could mean that your apartment is either not rent stabilized or the landlord failed to properly register it as stabilized.

Here are some other reasons you might have trouble requesting a rent history:

What if my landlord never registered my building or apartment as rent stabilized? 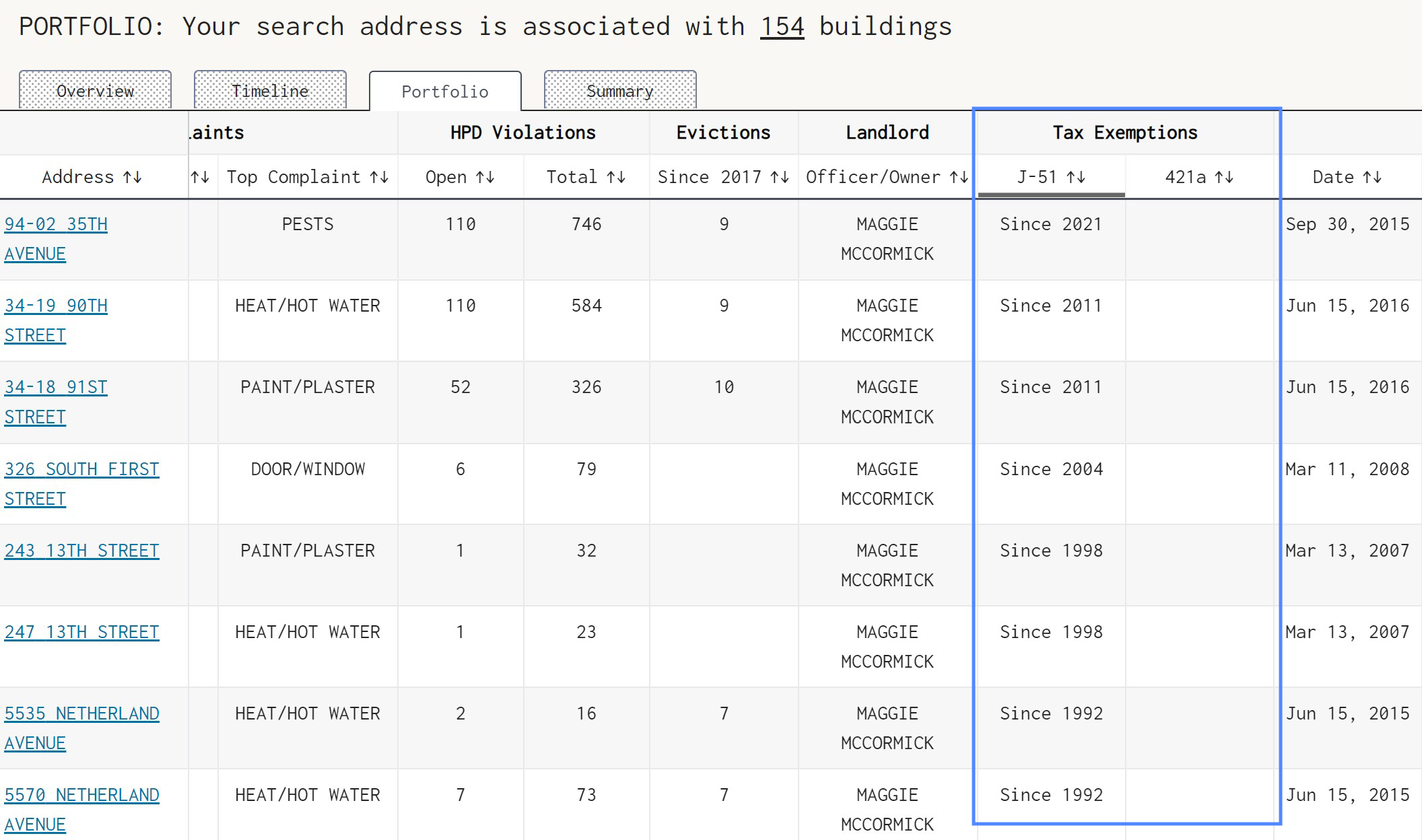 If you think your apartment should qualify as rent stabilized, you can file a complaint with DHCR and ask them to take two steps.

*note: there are other ways an apartment can become rent stabilized but these are the two most common ways.

I got my rent history but I don’t understand it. Help!

You will undoubtedly find your rent history long and perplexing. This is because DHCR does not require landlords to provide explanations when they increase rents, even when registering large jumps in the rent. Generally, landlords only need to offer you and NY State an explanation of their logic when challenged in a lawsuit or complaint within a specific time frame.

Take a deep breath and let’s get started with these tips to identify red flags:

Tip 1: Work backward & look for large jumps in the rent

Yes, rent histories often go back to 1984. But if you file a complaint, DHCR will most closely consider the rent increases in the last four to six years. If there’s evidence of intentional fraud — that is, a landlord increasing the rent without a legal basis — DHCR will look back farther. Starting from the last year, scan your rent history for any huge jumps in the rent and use the resources below to see if those jumps make sense.

Because the rent laws change periodically, the amount a landlord can increase the rent changes from year to year. In 2019, the law changed to eliminate loopholes that allow for large rent increases. Because of these changes, you should note whether rent jumps occurred before or after 2019 (when the Housing Stability and Tenant Protection Act (“HSTPA”) passed). Simply put, large increases or deregulations occurring after June 2019 are usually suspicious.

Note: IAIs should not include basic maintenance like repairing broken appliances, painting, or patching floors. 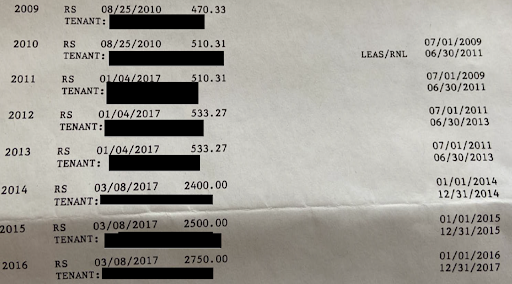 Caption: Between 2013 and 2014, the landlord increased the rent by nearly $2,000 or more than 400%. Even though this jump happened many years ago, an increase this large may indicate fraud and may allow a longer look back.

Tip 2: Watch out for preferential rents Landlords sometimes tell tenants they are getting a deal, called a “concession” or “preferential” rent. A preferential rent will often appear on the lease itself next to a larger number that represents the “legal” rent (i.e. what the landlord reports to the state as the maximum amount they could charge). Concession rents, on the other hand, often take the form of free months of rent (either upfront or during the first lease).

Tenants with these “deals” rarely complain or even order rent history, and courts have therefore found that preferential rents often serve to disguise fraud. If you have a preferential or concession rent, DHCR or a court might be willing to look back farther in your rent history for an overcharge. 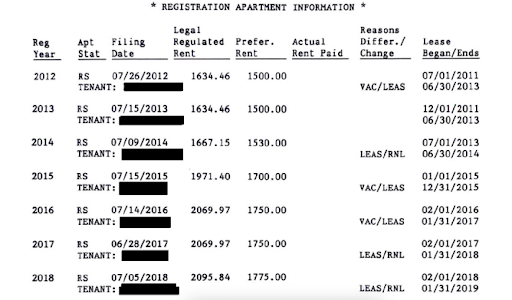 Caption: Because this landlord has offered a preferential rent for many years, filing a complaint may trigger an investigation going back farther in time!

Tip 3: Watch out for huge, abrupt de-regulations! Prior to 2019, once rents hit a specific “magic number,” landlords could remove an apartment from rent stabilization forever. Once removed from rent stabilization, a unit becomes “market rate,” meaning future tenants have no protections against large rent increases or eviction without good cause.

If you see that your landlord stopped registering your apartment before 2019, it may be because the landlord increased the rent above the thresholds listed below. It may take a lawyer’s assistance to help you determine if the landlord deregulated the unit illegally. But, no matter when deregulation happened, if your landlord illegally removed a unit from rent stabilization, you can file a complaint asking for recognition of your rent stabilized status. 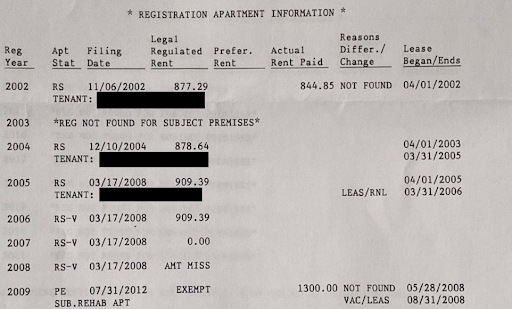 Caption: Example of a mysterious and abrupt deregulation. After 2006, the landlord claimed this apartment “exempt from registration” without explanation! Other landlords may just have stopped registering rents altogether and the rent history could say “no registration found."

Tip 4: Learn how rents legally increase Rent stabilized tenants get to choose between one- and two-year leases at every lease renewal, and, in New York City, the Rent Guidelines Board (“RGB”) determines the percentage increase. New increases take effect for all leases that start on or after October 1st. Because the RGB is politically appointed, the mayor plays a key role in how much the rent goes up (anywhere from 0-9% historically). Knowing about these increases not only helps you read your history but prepares you for rent increases going forward. Check out this chart on the RGB website to understand rent increases over time and to get information about this year’s increases.

That’s a lot of information! Is there anyone that can help?

Don’t worry! Confusion is normal because rent histories do not contain enough information for you to understand them completely or know whether the landlord’s report proves truthful. But, your rent history will provide clues to get you started.

Low-income households can call your local Legal Aid or Legal Services office to ask for a legal consultation or for information about a local legal clinic. You can also request a consultation through the New York City Bar Association. If your overcharge or illegal deregulation case appears strong, a lawyer may take it on contingency — meaning they’ll take a percentage of your winnings but won’t charge you upfront.

To challenge your landlord’s rent increase calculations, you can file a case in New York state court (for that, you’d want to retain an attorney),or you can file a complaint on your own with DHCR. Remember, landlords can report anything they want on a rent history; increases may have no basis in law or math. It’s up to you to report illegal rent hikes!

Why should I try to get my apartment declared stabilized or my rent lowered?

Other than enjoying a lower rent, helping to bring a unit back into stabilization also keeps rents affordable for future tenants. If tenants do not file complaints, landlords can register rents at whatever level they like without ever facing penalties.

Encourage your neighbors to file complaints too. If your landlord is engaging in rent fraud with your apartment, chances are the landlord has done the same thing to other tenants in your building or even across their portfolio.

Want to get started on forming a tenant association? Read our Tenant Organizing Resources guide created by organizers and tenants participating in our Design Advisory Council (“DAC”).

JustFix creates tools to protect your housing rights, from getting repairs to responding to eviction notices. Enter your address to see our tools.

Show me the tools

Research and understand your rights with our articles and guides.